FJ always care about your health and change the way you drink water! Buy our bottle with confidence, enjoy free return! The bottle does not leak at all, and I have even had it upside-down in a rucksack.
You can easily drink from this bottle with one hand, thanks to its flip-top that opens when you push a button.
Besides the carrying pouch with a clip on strap, there is also a smaller strap that goes around the top of the bottle, which can be removed if you pull it hard enough. There is also a cup brush that comes in handy for cleaning.
The stainless steel construction should withstand drops, and the insulated construction keeps my water cool.
I am very pleased with this water bottle. It looks great and it is highly recommended. 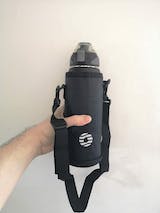 This is a real nice bottle. I use in my office. Great capacity

A
Anonymous
Easy to open

The review presented liter dark blue height 27,5 with the bottom diameter of 8,5 cm, neck-5,3 cm. Bottle is a kind of thermos with steel inside bulb, vacuum layer and plastic outer bulb of soft-touch plastic. This design allows you to keep the temperature of hot liquid up to 12 hours, and cold-as many as 24 hours! Cover with latch one-touch, which makes it easy to open the bottle while running. High quality rubber plug protect bottle from leaks even during the most active movements! Complete receive bottle, fabric cover with carabiners and strap to attach to backpack or shoulder bag, foam brush for cleaning inside the bulb. 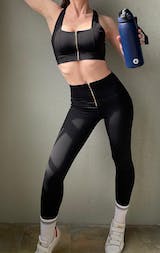 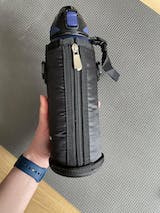 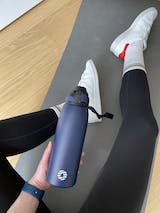 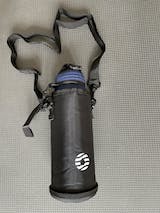 I’ve been in the market for a nice vacuum-walled water bottle for a bit now. I’m a big fan of the Hydro Flask brand (and I have a couple of them), but I don’t like any of the lid options for easy drinking. This option from FJbottle appealed to me due to the magnetic lid option so I thought I’d give it a try.

So, this is a pretty no-nonsense package. Pretty much just the water bottle (in a protective plastic wrapping) in a cardboard box. I list this as a positive because I hate wasteful packaging. But some might like something a little fancier if you’re planning on giving this as a gift.

The bottle itself is a great size for me (I opted for the 34oz. size). It’s a little too big to fit into average cycling bottle holder though (it doesn’t fit on my bike). I didn’t buy it for that so it’s not an issue to me. But you may take that into account.

The cap comes off to reveal a 2 ⅛” opening (5cm). It’s about the same size as my hydro flask so there’s no problem filling the bottle or adding ice. I think the drinking spout is a good size (about ½” or 20mm), though other reviewers have complained about it. I have no problem drinking from this bottle.

The cap is also easy to use (not to mention the reason I ordered this bottle). There is a little magnet in the lid arm as well as the base that holds the lid in place while you drink. It works perfectly. I’ve also seen a review or two that complains about treading the lid and/or cap. I have no idea what they’re talking about. The lid/cap are as easy to use as any other bottle on the market. I’ve been using this bottle for almost a week and I’ve not mis-threaded the cap once.

The last thing I’ll mention is that it comes with a convenient little scrub sponge to assist in cleaning it out. It’s a nice, unexpected touch.
*What I didn't like*:

Nothing. For the price, this is great bottle (so long as you don’t expect it to fit in a cycling bottle holder).

I couldn’t be happier with this bottle. It’s big enough that I don’t have to refill it quite as often and the magnetic lid/cap is so convenient. Best of all, it’s less than half the price of a similar-sized Hydro Flask. This bottle is an easy five stars out of five from me. I’d totally order it over again knowing what I know now. 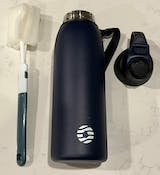 I bought this for a trip and after a whole Day of sitting in the hot car the ice was still there and the water was cold. Very impressed and would highly recommend. It also fits in the cup holder so that’s a huge plus!